DOGO: Hi Kiki, can you introduce yourself to us?

KIKI: I was born in Greece. I graduated from the departmant of Stage Decorations and Costume in Mimar Sinan Fine Arts University. After a short NY adventure, I came back to İstanbul and started working in textile indusrty in “Oxxo” as a designer. Then I established my own brand Kiki’s Design. I added YOGA to my life, it was one of the biggest investments I did for myself. I received a 200-hour yoga instructor certificate and currently working for Kiki’s Design, teaching yoga, and also teaching design at a private university. I’m a vegan brand owner, a yoga instructor and a fashion design lecturer. 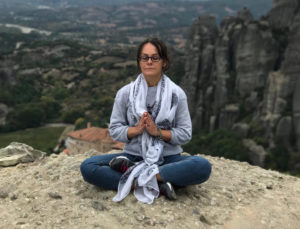 DOGO: As far as I know, you switched to a new Vegan life style. How did it happen? What are the advantages and disadvantages of being Vegan?

KIKI: Being vegan wasn’t something I planned before. When I started a travel project, I was requested to eat vegan by my consultant. My hands were trembling those days, I thought it was due to tiredness, but it started to increase day by day. I was delaying to go to the doctor, at the same time I started to eat vegan. 2 months later I noticed that my trembles stopped. I asked an expert about the situation it turns out that animal protein harmed my nervous system for some time, and if I hadn’t started to be vegan, he would tell me to stay away from animal protein. What a bit of luck! I’ve lost 9 pounds after becoming vegan. I feel as fit as ever! The biggest problem was calcium.

However it can also be taken from the olive leaf, a cup of olive leaf tea every day tastes really nice. They say you are what you eat. I think it’s really true, before becoming vegan I could mix everything together. In detail, my mind is eliminating everything that is crowded now like foods, people, plans and so on. You feel more selective. You can’t eat anything that is packaged and harmful. Your blood sugar is always balanced, you don’t have sweet cravings and hunger crisis anymore! Obviously you dont have any crisis in your life! Also you get a lot of attention, all eyes on you.

So cool! In the earlier stages I was saying “I’m vegan”, but it attracts lot of people. Nowadays, if I come across milk,meat,yoghurt etc. I say “I’ll pass, can’t eat them.” These are the few things that came to my mind. However lot of attention can be a disadvantage.

DOGO: How is vegan life at Turkey going?

KIKI: In Turkey, especially in İzmir people eat vegan but they are not aware of it. They eat vegan and add meat on it. We have everything here vegetables, fruits, cereals.. If you like cooking like me there’s nothing difficult. The only problem is eating out, you only have one choice. Nowadays menus started to have vegan sections. There are websites that you can order vegan cheese, milk and yoghurts, the prices are also appropriate. Kitchen costs fall by half😊

DOGO: Do you have any difficulty in finding vegan clothes and products?

KIKI: I wear my own designs they are vegan. I pay attention my products to not be made from goose feather leather wool or silk. I use Eyüp Sabri Tuncer’s hand soaps, they are vegan too.

DOGO: How did you meet with DOGO?

KIKI: I met with DOGO years ago in İstanbul Tünel and I’ve been loving,following it since then.

DOGO: Can you describe DOGO in 3 words?

DOGO: What is your favorite DOGO design and why?

KIKI: I guess the last boots I bought, because they are so comfy and I get so many compliments like “how beautiful your boots are”. The shoes I’ve ever worn have not received so much compliments😊 For the records, I bought 2 pairs of the same boots to give as a gift.