As DOGO family, we have included Vincent Van Gogh’s ‘Starry Night’ in the MUSE collection, where we focus on the art pieces of the master painters. Would you like to take a closer look at this work? Vincent Van Gogh painted this work in 1889 while he was in a mental hospital in France. Van Gogh, who does not feel captivated in the room he stays in, on the contrary, shows us his wonderful perspective on the outside world.

Van Gogh was an expressionist painter who wanted to tell us something in his works. There are also assumptions about the story of this work. Did Van Gogh describe nature as divine? Van Gogh was known as a religious man. In the upper right corner of the Starry Night work, the moon and the sun are depicted together, while eleven circles located in the sky attract attention. Known as the story of Yusuf, “I had a dream. I saw the sun, moon and eleven stars leaning towards me” it is believed that he refers to his verse with this work.  Another assumption is related to the family of Vincent Van Gogh, who grew up in a religious family. Van Gogh’s family doubted the success of his career. Van Gogh believes that he will one day be accepted as an authority by his family. In his work, it is mentioned that he wanted to emphasize this situation in a divine way.

‘Starry Night’ is currently exhibited at the Museum of Modern Art in New York. 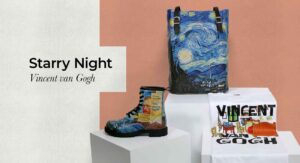 Did you know that?

In the artist’s letter to his brother Theo, “I saw the country from my window this morning long before sunrise there was nothing but the morning star that looked so big.” It is known that he wrote. Research suggests that the morning star mentioned maybe Venus. Studies mention that when Van Gogh was working on ‘Starry Night’, Venus was in a similar position and was bright as in the picture.

No matter which assumption is correct, as a DOGO family, we admire Vincent Van Gogh’s emphasis on geometric forms, distortion of jerseys, and use of unnatural colors. In addition to Vincent Van Gogh’s Starry Night and Bedroom in Arles works, we also combined the painting of other master painters with our products. Start exploring our MUSE Collection now! 😊 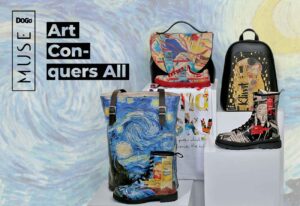